A Word About Joe Bugel

Talk about the Washington Football Team here. Do you bleed burgundy and gold?
Post a reply
3 posts • Page 1 of 1

A Word About Joe Bugel

Unfortunately the site was down when Joe Bugel passed away. There have been many moments during the site's near two year break that I wanted to write, but few or none, more than that day.

I'm not going to wax poetic about his football prowess. I will likely create a full legend page for him as it is overdue, and he is worthy. It was always on the backburner, and I wish now that I had put it together before he passed. He always seemed to get overlooked in his greatness because of his unassuming persona.

I do want to talk about that persona though. And tell a little story about that man named Joe...

Remember when Gibbs returned? Sure, we all do. Likely with some mixed emotions now, but at the time, we were all pretty ecstatic about the news.

Back then we tried to raid training camp and provide some in-depth transcriptions of practice each year.

My brother from another mother Hailskins666 and I were at practice on I believe day one or day two of training camp.

We had brought our official The-Hogs.net tee-shirts and were aiming to give one to Buges. I'm pretty sure it was Scott who got his attention and got him to come to the rope line where we were standing. We gave him the shirt, and asked him if he would mind signing another one for us. Not only did he sign the shirt gladly and willfully, he looked us square in the face and said, "I really appreciate this. It's fans like you guys that made Joe and me come back."

And he walked away as quickly as he had come.

And Hailskins and I were left with a moment that will last forever. Sure he could have just been saying it, and sure, it was a general statement.

But I promise you that if you were there, you would know that he couldn't have seemed more genuine. There wasn't a drop of cliche in it. He couldn't have made me feel like it was from the heart any more than he did. It's one of my favorite camp memories and we had some dingers. I'm sure hailskins would agree. The picture below is during that interaction.

What a special person Joe Bugel was to engage us in that way.

I will remember that above and beyond the fact that he was one of the greatest o-line coaches the game has ever seen.

He was an even better man. 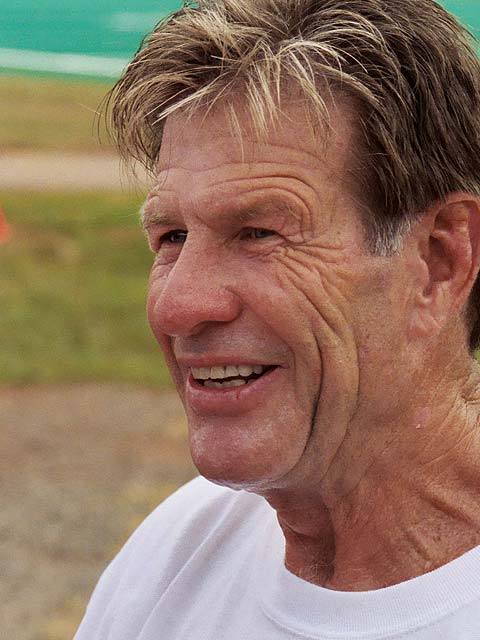 Re: A Word About Joe Bugel

I remember taking that photo.

Re: A Word About Joe Bugel